Here you can find some general information about Sri Lanka, to give you a quick image of the country. This will only provide a brief summary of the most important things in Sri Lanka. People who take an interest in the research can relate the outcomes with this general information to get a better overview of the country and be up to date right away.

Sri Lanka is an island in the Indian Ocean lying 28 kilometers (18 miles) off the south-eastern coast of India. The island is about the size of Ireland and the total population of Sri Lanka in 2020 is 21.4 million people. Density is the highest in the south-west where Colombo, the biggest city and the main port and industrial center, is located (Wikipedia, 2020. 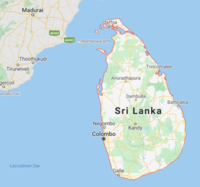 The culture of Sri Lanka mixes traditional with modern aspects and is known for its regional diversity. The Sri Lankan cultures has long been influenced by the heritage of Theravada Buddhism passed on from India. The history of the colonial time has also left a mark on the culture with Portuguese, Dutch and British elements which are intermingled with various traditional facets of the Sri Lankan culture. Culturally, Sri Lanka possesses strong links to both India and Southeast Asia (Wikipedia, 2020). .

The island's two major ethnic groups, the Sinhalese and the Tamils, and its two dominant religions, Buddhism and Hinduism, made their way to the island from India. Despite its obvious affinities with India, Sri Lanka nevertheless developed a unique identity over the ages that ultimately set it apart from its neighbor. Cultural traits brought from India necessarily underwent independent growth and change in Sri Lanka, owing in part to the island's physical separation from the subcontinent. Buddhism, for instance, virtually disappeared from India, but it continued to flourish in Sri Lanka, particularly among the Sinhalese. The official languages in Sri Lanka are Sinhala, mostly spoken by the Sinhalese people who constitute approximately 75% of the population. The Tamil language is spoken by Sri Lankan Tamils, the number of Tamil speakers is around 4.7 million people.

Sri Lanka has a rich artistic tradition, with distinct creative forms that contain music, dance, and the visual arts. The culture is internationally associated with cricket, a distinct cuisine, an indigenous holistic medicine practice, religious iconography such as the Buddhist flag, and exports such as tea, cinnamon and gemstones. The cuisine is primarily influenced by that of Southern India, Indonesia and the Netherlands (Wikipedia, 2020).

The northern and eastern of the island are considerably drier, lying in the rain shadow of the central highlands. The Sri Lanka dry-zone dry evergreen forests are a tropical dry broadleaf forest ecoregion. Sri Lanka's forests are amongst the most beautiful rich in Asia and for some faunal groups, it has the highest density of species diversity in the world. Offshore is the Bar reef, habitats associated with coral reefs.

Deforestation is one of the most serious environmental issues in Sri Lanka, but also air pollution and water pollution are challenges for Sri Lanka. The island is also vulnerable to climate change impacts such as extreme weather events and sea level rise (Wikipedia, 2019).

The main economic sectors of the country are tourism, tea export, apparel, textile, rice production and other agricultural products. In addition to these economic sectors, overseas employment contributes highly in foreign exchange: 90% of expatriate Sri Lankans reside in the Middle East. The free market economy of Sri Lanka is worth $88.9 billion dollars by GDP. With an income per capita of 4,103 nominal US dollars, Sri Lanka is the second wealthiest nation in South Asia after the Maldives and is an upper middle income nation.

Approximately 50% of the populations works in agricultural production. According to the United Nations is 22.7% of the Sri Lankan population living below the poverty line, the income that someone needs to meet basic needs (Wikipedia, 2019).

The earliest human remains found on the island of Sri Lanka date to about 34,000 years ago (Balangoda Man). Sri Lanka has had a continuous record of human settlement for more than two millennia, and its civilization has been shaped largely by that of the Indian subcontinent.

Also important to Sri Lanka's cultural development has been its position as the nexus of important maritime trade routes between Europe, the Middle East, and Asia. Long before the European discovery of an oceanic route to India in the 15th century, Sri Lanka was known to Greek, Roman, Persian, Armenian, Arab, Malay, and Chinese sailors. With the coming of the Europeans, however, the strategic importance of Sri Lanka increased, and Western maritime powers fought to control its shores. Both Sri Lanka and India came under European influence and colonial rule. This common experience worked to tighten the long-standing links between the two countries, and, with the attainment of independence in the mid-20th century, Sri Lankan and Indian social institutions and ideologies began to resonate more closely with each other (Arasaratnam. S. and Peiris. G. H., 2020).

Wikipedia (2019, 8 December) Environment of Sri Lanka. Consulted on 25 May 2020 from https://en.wikipedia.org/wiki/Environment_of_Sri_Lanka

Worldometers (live) Sri Lanka Population. Consulted on 25 May 2020 from https://www.worldometers.info/world-population/sri-lanka-population/