Ghana is a West African country. Its 540 km southern coastline is part of the Gulf of Guinea, the name given to the tropical region of the Atlantic Ocean bounded by Cape Palmas (Liberia) in the far west and Cape Lopez (Gabon) in the far south. Ghana is bisected by the Prime Meridian which runs through the port city of Tema, 25 km east of the capital Accra. Cape Three Points, the most southerly peninsula in Ghana, is distinguished by being the closest land to the oceanic intersection of the Prime Meridian and the Equator.

Ghana is neighbored by Ivory Coast (Cote d'Ivoire) to the West, by Togo to the east, and by Burkina Faso to the North and northwest(GlobalSecurity, 2017).

Fertility in Ghana remained high and fairly constant up until the mid 1980's; a total fertility rate (TFR) of over 6 children per woman was indicated by various studies in Ghana during the 1960's to 1980's. But the 1993 Ghana Demographic and Health Survey (GDHS) results show that fertility has begun to decline. The survey indicated a TFR of 5.5 children per woman for the 5-year period prior to the survey, compared to 6.4 children in the 1988 GDHS.

In the 1990s the US Bureau of the Census argued that Ghana's age structure was changing, a consequence of falling fertility. The most important changes were seen as the declining proportion of children and increasing share of the working age group; between 1990 and 2020 the number of children under 15 (now nearly 8 million) was projected to remain virtually constant while the 15 to 64 year age group will nearly double from 9 million to 18 million. There was also projected to be a substantial increase in the elderly population (65 and over), from 549 thousand to over 1 million, but their share of the total population would still be small.

The anticipated demographic transition seems not to have happened. With the fertility rate averaging about seven children per adult female and expected to fall only to five children per adult female by the year 2000, the population projection of 35 million in 2025 becomes more credible. A number of factors, including improved vaccination against common diseases and nutritional education through village and community health-care systems, contributed to the expanding population. The rise in the nation's population generated a corresponding rise in the demand for schools, health facilities, and urban housing (GlobalSecurity, 2017).

According to current projections, Ghana's population will continue to grow the rest of the century, reaching 78.71 million people in 2099. This means that Ghana will more than double its current population of 31.07 million people over the next 80 years. Ghana is currently growing at a rate of 2.15% per year, which has slowly decreased from 2.95% in 1985 but still remains high. The main cause of this growth is Ghana's high fertility rate of 3.89 births per woman and the country's efforts to minimize birth mortalities.

Ghana's population growth is alarming to experts as the country is not equipped to handle the dramatically increased needs for food, water, sanitation, education, and employment that comes with a rapidly growing population. Efforts to slow the population growth are rooted in family planning, which would reduce the number of births or help families properly space out births (worldpopulationreview, n.d.).

There are over 100 ethnic groups living in Ghana. The largest are Akan, Moshi-Dagbani, Ewe, and Ga. The Ashanti tribe of the Akan are the largest tribe and one of the few societies in West Africa where lineage is traced through the mother and maternal ancestors. Once famous for the luxury and wealth of their rulers, they are now more well known for their craft-work such as hand-carved stools, fertility dolls, and 'kente' cloth. Kente cloth is made cotton and is woven in bright, narrow strips with complex patterns.

Family is a very strong bond in Ghana and is the primary source of identity, loyalty and responsibility. Family obligations take precedence over pretty much everything else in life. Individuals achieve recognition and social standing through their extended family.

An interesting cultural variation among the Akan, or Ashanti and Fanti people, is that affiliation within the clan is through women. Mothers have a higher status as in their point of view people get their blood from mothers.

It is important for Ghanaians to maintain dignity, honor, and a good reputation. The entire family shares any loss of honour, which makes the culture a collective one. In order to protect this sense of face there is a need to maintain a sense of harmony; people will act with decorum at all times to ensure they do not cause anyone embarrassment.

Ghanaian society is hierarchical. People are respected because of their age, experience, wealth and/or position. Older people are viewed as wise and are granted respect. In a group one can always see preferential treatment for the eldest member present. With respect comes responsibility and people expect the most senior person to make decisions that are in the best interest of the group (Commisceo Global Consulting Ltd., 2020).

Ghana is a deeply religious country. Respect for religion is almost everywhere. For example, you see preachers on public transport and in the streets or religious celebrations such as funerals. But you also see many funny ways to respect God. Like 'Jesus loves Fashion' or 'If God Says Yes Snack Bar' (Lonely Planet, n.d.).

In Ghana, Christianity is the greatest religion. With a total of 71.2% this is clearly noticeable. Christianity is divided into side branches of Christianity. You will come across churches of every thinkable Christian denomination. Even the smallest village may have two or three different churches. In the first half of the 20th century, the number of people of Christianity increased at the expense of indigenous religions, but the trend slowed down after independence (Maier & Boateng, 2020).

From the end of the 20th century, the number of adherents of Islam began to increase. About 17.6% is Muslim in Ghana. The majority is in the north, but there are also significant Muslim minorities in southern cities such as Accra and Kumasi. There are many Ghanaians who retain their traditional faith in addition to the Christian or Muslim faith. The traditional faith believes in spirits and forms of gods that live in nature. Ancestor worship is an important part of this tradition (Lonely Planet, n.d.).

English is the official language used in Ghana. It was passed on to the Ghanaians by their British colonialists. English is predominantly used for government and business affairs. It is used in legal and administrative documents and procedures. Besides, English is also used in Ghanaian politics and media coverage (Omondi, 2017).

Ghana has a relatively calm political climate and is an example for other African countries in that respect. Jerry Rawlings seized power in the country in 1979 and maintained his leading position when democratic elections were held for the first time in 1992. After two terms as president, he peacefully transferred power to John Agyekum Kufuor in 2000. The democratic multi-party system appears to work well and this has led many Western institutions (such as the World Bank) to help the country with economic aid. Foreign companies also dare to invest in Ghana. Nevertheless, the economic position remains worrying. Foreign debts are high and the national currency is weak. Agriculture is and remains the most important economic sector. Gold, cocoa and wood are the most important export products. In recent years, oil fields have been found off the coast, which will somewhat reduce the import burden of this commodity.

Following the recovery from economic recession in 1984, Ghana's growth has been remarkably strong, with the lowest economic growth rate of 3.3% recorded in 1994. Ghana reached middle-income status after a rebound in national accounts, resulting in per capita gross domestic product (GDP) exceeding US$1,000 in 2007. Over the past two decades, the country has made great strides towards democracy in a multi-party system, with the independent judiciary gaining public confidence (The worldbank in Ghana, 2019).

Two and a half years after being elected president, President Akuffo-Addo has successfully put into practice some of his promises, such as planting food and jobs and free secondary education. The country's growth rate reached its peak of 15 percent in 2011 on the back of the beginning of commercial oil production, making it one of the fastest growing economies in the world in that year. This has translated into an increase in per capita income, which peaked at around USD 1,900 in 2013. However, the concern was the country's ability to maintain this growth momentum, given the level and quality of education and skills, and, more importantly, the fact that this strong growth performance did not translate into the creation of productive and decent jobs, better incomes and more livelihoods (Aryeetey & Baah-Boateng , 2016). 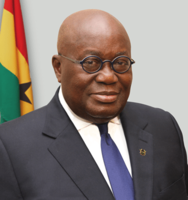 The Ghana we now know doesn't exist that long. Between the eighth and eleventh century you found the "Ghanaian Empire" in Africa, but this was more northerly than the current country. This only came into being in the twelfth and thirteenth centuries when the Akan people moved into the area. In the sixteenth century these peoples formed a more or less centralized state. Europeans first became acquainted with the area in the late fifteenth century and soon discovered that there was a lot of gold in the soil. Yet it would take until 1901 before the English colonized the country. Only when the country in 1957 (as first colonized African state) became independent from the European ruler, the name Ghana was born. There existed a period with coups but in 1992 the country became democratic. Since then, the country have had two presidents that both ruled for two terms of four years. At the beginning of 2009, the country's third president, John Atta Mills, was elected. Unfortunately he died on 24 July 2012 because of throat cancer. Because of that, Vice President John Dramani Mahama was appointed President of the Republic of Ghana that same day. In the 2016 presidential elections, incumbent President Mahama was defeated by Akufo-Addo, who has been President of Ghana since January 2017 (RONDREIS, 2020).

ALL THE GHANA SOURCES YOU CAN FIND HERE