Lebanon, capital Beirut, is a country in the Middle East, located on the east side of the Mediterranean Sea. In order to understand Lebanon, some background knowledge is important, as will be explained here. Further, it should be noted that much of Lebanon is riddled in uncertainty, as such, this will be reflected in much of this information.

Depending on who you ask, people will consider themselves to be Phoenicians as opposed to Arab; this mainly holds true for Christians. Further, ethnic background is not the way to provide better insight into the Lebanese, rather this is done by religion. Lebanon, regarding religion, is the most diverse country in the Middle East according to the CIA factbook, and thus shows a better insight into the demographics. Lebanon recognizes 18 different religions.

It should be noted that these numbers will vary between source, as Lebanon has not had an official census since 1932. Further, it should also be noted that religion plays an important role in the Middle East, especially when juxtaposed to the 'West'. As such, every passport states the persons religion (The World Factbook, 2020). 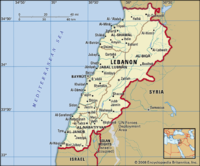 The population of Lebanon is a debated number. This is due to the last official census having taken place in 1932. As such, the estimates shall be given from different sources, at time of writing (16 May 2020).

One of the reasons that the estimations are so uncertain on Lebanon is due to the Syrian civil war that started in 2012. Millions of people fled from that conflict, many of which went to Lebanon. The population is also affected by the earlier Israel/Palestine conflict, which also saw many refugees entering the country.

Arabic is the official language, however, French is very much a second language of the country. For example, all Lebanese money and number plates are printed in both Arabic and French at the same time. And often both will be taught at schools. A sizeable part of the country speaks either English or Armenian (Khalaf et al., 2020; The World Factbook, 2020).

Lebanese culture is heavily influenced from its surroundings. Good relation with Arab world and Islam, but also the west and Christianity. That is the basis of Lebanese culture. While large parts of the culture stems from the people's diverse ethnic roots, religion, or history, their as time passed this started to develop into its own culture, specific to Lebanon. The Lebanese elite have also affected the rest of the world; such as much of Arab television is based on Lebanese progress. Some of the progressiveness of the middle east can also be attributed to Lebanon. However, the great differences of cultures makes certain behaviors acceptable / unacceptable depending on where in the country you are. Most elements of culture are thus embedded in people's religious backgrounds, however, somehow still manages to accumulate in a divided yet collective whole. Downsides of the culture include the cultures acceptance of corruption, which is widespread throughout all levels of the society, and is practiced in small companies to the government. In recent years, Unity as a Lebanese based on citizenship has been on the rise, compared to the more religious divide; although that still has far to go (Khalaf et al., 2020; The World Factbook, 2020; [Redacted], 2020).

Lebanese politics is based on religion as well. A parliamentary democracy according to the constitution. The parliament decides (makes the laws and takes the decision on what to be covered) and the cabinet being the executive authority (they will implement the laws). The parliament and cabinet are both 50% Muslim and 50% Christian. Highest degree civil servants, general of the army, head of the central bank, etc. need to be balanced. The president has to be Maronite Christian, the speaker of the house has to be Shia Muslim, the prime minister has to be Sunni, the chief of the army Maronite, central bank governor Maronite.

Further, much of the politics in Lebanon, as in the rest of the Middle East, is based upon the proxy warfare between Saudi Arabia and Iran. Where the biggest political parties are affiliated with these foreign nations. The Future Movement led by Saad Hariri, a Sunni Muslim and is heavily influenced by Saudi Arabia. On the other side is Hezbollah led by Hassan Nasrallah, a Shia Muslim tied to Iran. Despite Hezbollah being part of the Lebanese government, it is the same Hezbollah that is seen by many 'Western' countries as a terrorist organization (Khalaf et al., 2020; The World Factbook, 2020; [Redacted], 2020).

For a timeline of recent events in Lebanese history, click here.

Lebanon uses two forms of currency; the Lebanese Lira (LL) and the United Stated Dollar (USD). While for many years the LL was directly pegged to the USD at an exchange rate of around 1,500.00 LL for 1.00 USD, the recent economic crisis that the country faces has changed that. Whilst internationally this value still holds, in Lebanon this value has over doubled. That is to say, 3,000 LL for 1USD. People can mainly withdraw Lebanese pounds from the bank , and with much import (based on US dollars) the imported goods have skyrocketed in prize. This financial

crisis started before Corona, and is a major issue that Lebanon faces. The poor especially are suffering extensively from the financial issues (Khalaf et al., 2020; The World Factbook, 2020; [Redacted], 2020).