Malawi is an African country located in the south-eastern Africa. The country is surrounded only by land. Malawi is full of spectacular highlands and extensive lakes, it occupies a narrow, curving strip of land along the East African Rift Valley. Lake Nyasa, known in Malawi as Lake Malawi, accounts for more than one-fifth of the country's total area. 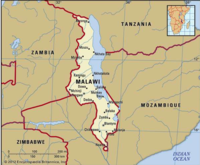 The capital city of Malawi is Lilongwe. With a population of approximately 18 million people, Malawi is one of the most densely populated countries in Africa but with only 16 per cent of people living in towns, one of the least urbanised. Most of Malawi's population engages in cash-crop and subsistence agriculture. Almost 75% of the people depend on farming of different typed of clops such as maize, rice, tomato, sweet potatos, tea, tobacco, cotton, beans, and many more. The staple food is Msima made from Maize Flour.

The country stretches about 520 miles (840 km) from north to south and varies in width from 5 to 100 miles (10 to 160 km). It is bordered by Tanzania to the north, Lake Malawi to the east, Mozambique to the east and south, and Zambia to the west. Malawi has four regions as follows Southern Region, Central region, eastern Region and Northern region (Kalinga & Ingham, 2020).

There is a rich cultural mix in Malawi with the Chewa being the most numerous tribe. Others include Nyanja, Yao, Tumbuka, Lomwe, Sena, Tonga, Ngoni, Ngonde, Asian and European. The Chewa are largely in the central and southern parts of Malawi. The Yao people are predominately found around the southern area of Lake Malawi and the Tumbuka are found mainly in the north of the country. There are small populations of Asians and European people living mainly in the cities.

Each tribe has contributed to the modern Malawi scene, whether it be in dress or dance or language. Masks are commonly used in various dances and ceremonies and these are usually tribe-specific, the best known being the Gule Wamkulu, performed by the Nyau of the Chewa.

The Chewa Tribe is an African culture that has existed since the beginning of the first millennium, A.D. Their local language is called Chichewa. In Malawi, the Chewa are predominantly concentrated within the central region, surrounding the capital city of Lilongwe. The Chewa believe that living things were created by God. "Gule Wamkulu" (Big Dances associated with masks), has become a sort of title for secret societies of traditional Chewa religious practices. The Gule Wamkulu ceremonies consist of formally organised dances to admire the remarkable physical abillities of these individuals, called "Nyau". If one has the misfortune of passing a Gule on the road, traditional behaviour consist of dropping a few coins for the Gule - never handing them the money directly for fear they will grab you and take you to the cemetery for ritual purposes. Masks worn by the Gule Wamkulu include thousands of different representations - generally each developed hundreds of years ago by unique tribes and accented with their own individual touch. Today, these masks, with their different origins, are part of what is now the Chewa culture.

Malawi is often called the "Warm Heart of Africa" because of the warmth and friendliness of the people. Malawians typically live with their extended families in huts that are grouped together in villages. A spirit of cooperation prevails as family members share both work and resources. As you drive through Malawi you can see the small villages of huts and people at work in the fields or collecting water for their families (Earth Cultures).

In this youtubeclip you can get an impression of the culture of Malawi (Malawi Tourism, 2019): 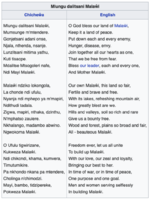 The national language of Malawi is Chichewa and the official language is English. Malawi has other languages like Tumbuka, Yao, Sena, Lomwe and many more.

The official language of Malawi is English. It was first introduced to the country towards the end of the 19thcentury. The introduction was a result of the influence of the arrival of the Britisch African Lakes Corporation, missionaries, exploreres, and the colonial administrators who were present since the Britisch Central Africa Protectorate was established in the 1890s. However, following the country's independence, the language managed to remain prevalent. According to Malawi's Constitution, English is the statutory national language. English is also the language that students in international schools are taught in, while in government schools they learn it as a second language.

Even though English is the official language of Malawi, at present, Chichewa is the most common language spoken in the country. Mostly in the southern and central regions of Malawi. Chichewa, also was known as Chinyanja, Chewa or Nyanja is the native language of about half of Malawi's population. The government of Malawi further promotes active command and functional literacy of the language through media usage. A variety of educational programs and research activities are held, all under the Chichewa Board which is currently known as the Centre for Language Studies. Chichewa is a Bantu language spoken in Malawi, Zambia, Mozambique, Zimbabwe, Eswatini and Botswana.

The Yao which is a Bantu language in Africa comprises of approximately 2 million speakers in Malawi. Most Yao speakers in Malawi live in the county's southern region. In the country's Northern Region quite a lot have Tambuka as language. Tambuka is among the native languages spoken in Malawi. The language is spoken by about 9.5% of the population of Malawi. Tambuka lost its status as the country's official language following the one nation, one language policy implemented since 1968. As a result, the language was removed from the print media, the school curriculum, and the national radio. However, efforts of returning Tambuka programs on the radio have started again (Chepkemoi, 2017).

Malawi is among the world's least developed countries. Around 85% of the population live in rural areas. The economy is based on agriculture, it contributes 28.1% of GDP and 90% of export revenues come from this. Malawi's most important export crop is tobacco, which accounted for a third of export revenue. The country also relies heavily on tea, sugarcane and coffee, with these three plus tobacco making up more than 90% of Malawi's export revenue. Lake Malawi and Lake Chilwa provide most of the fish for the region. For many Malawians, fish is the most important source of proteins. Dried fish is not only consumed locally, but also exported to neighbouring countries. Most fishing is done on small scale by hand. However, Maldeco Fisheries owns several commercial fishing boats and operates fish farms in the southern part of Lake Malawi. We received several pictures from our contact Brighten. He lives nearby the lake where a lot of fisherman are fishing. In 2016, Malawi's manufacturing sector contributed 15.8% of GDP. The main industries are food processing, construction, consumer goods, cement, fertilizer, ginning, furniture production and cigarette production. The service sector accounts for 56.1% of Malawi's national GDP. Notable industries are tourism, retail, transport, education, health services, telecommunication and the banking sector (Wikipedia, 2020).

Malawi is a multiparty republic, currently under the leadership of Peter Mutharika. Its original constitution of 1966 was replaced with a provisional constitution in 1994, which was officially promulgated in 1995 and has since been amended. It provides for a president and up to two vice presidents, all of whom are elected by universal suffrage every five years. They are limited to serving no more than two five-year terms. The president serves as head of state and government. The cabinet is appointed by the president. The legislature, the National Assembly, is unicameral; its members also are elected by universal suffrage and serve five-year terms.

The country is divided into number of administrative subdivisions - district, city, municipality, and town - that are governed by assemblies. Each assembly has a political arm and a technical arm. Efforts have been undertaken to strengthen local governments by giving them more financial autonomy from the central government.

Malawi was a de facto one-party state from August 1961, when the first general elections were held, until 1966, when the constitution formally recognized the Malawi Congress Party (MCP), led by Banda, as the sole political organization. The 1966 constitution was amended in 1993 to allow for a multiparty political system, and since then several other political parties have emerged, with the United Democratic Front (UDF) quickly becoming one of the most prominent. Under the constitution, all individuals are permitted the right to participate in the political process, including the right to stand for public office. There is universal suffrage for citizens age 18 and older. Women have held some positions in the National Assembly, the cabinet, and the judiciary, and members of minority groups also participate in Malawian political life.

The Malawian armed forces include an army, which is itself divided into land, marine, and air forces; there is also a paramilitary force. Military service is voluntary, and individuals at least age 18 are eligible to enlist. Service commitments consist of two years of active duty and five years of service in the reserves (Kalinga & Ingham, 2020).

History of Malawi covers the area of present-day Malawi. The first Europeans who came to Malawi were Portuguese explorers. They reached the interior in the early 1600s from Mozambique. But the most famous explorer were the Scot David Livingstone. He followed a major tributary called the Shire into southern Malawi, reaching Lake Malawi in September 1859. He called it the lake of stars. He was followed in succeeding decades by British missionaries, traders and planters. This was an unsettled period, with widespread slave raiding (Lwanda, 2007). 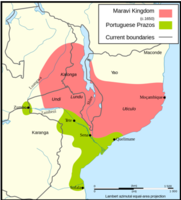 The region was once part of the Maravi Empire. Maravi means 'reflected light'. Perhaps it's a reference to the reflecting sunlight in the lake. Maravi was a kingdom which straddled the current borders of Malawi, Mozambique, and Zambia, in the 16th century. In colonial times, the territory was ruled by the British, under whose control it was known first as British Central Africa and later Nyasaland. It became part of the Federation of Rhodesia and Nyasaland. The Federation was vigorously opposed and, in 1958, Dr Hastings Kamuzu Banda returned home from Ghana, at the invitation of the Nyasaland African Congress, to lead the fight against it.

The government declared a state of emergency in 1959 and arrested Banda and other members of Congress. Following his release in 1960, a series of constitutional conferences was held, as were elections. The country achieved full independence, as Malawi, in 1964. Banda became the Prime Minister. In 1966 Malawi became a republic, with Banda as President. A new constitution gave the President, who was also commander- in-chief of the armed forces, widespread powers. He held a number of ministerial portfolios, including External Affairs, Agriculture, Justice and Works. Malawi became a one-party state, with Malawi Congress Party (MCP) as the sole party (Kalinga & Ingham, 2020).

Chepkemoi, J. (2017, Augustus 1). What Languages Are Spoken In Malawi? Retrieved from WorldAtlas: https://www.worldatlas.com/articles/what-languages-are-spoken-in-malawi.html